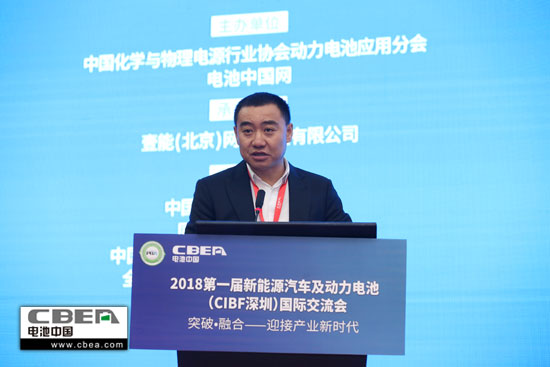 Wang Weidong, chairman of YH Technology co LTD (hereinafter referred to as "" YH Technology" "), said at the conference that automation integration of lithium electrical equipment is a development trend in the industry.

With the development of the new energy car industry, there has been a huge company increase of in power batteries, lithium and battery materials in the last few years. Wang Weidong said that in China's new energy automotive industry achieved remarkable development environment, lithium electric equipment industry ushered in the golden period of development, a lot of lithium electricity equipment companies also enjoyed the whole industry development dividends. YH Technology is successfully listed on the lithium battery industry for many years of innovation.

In the early stage of development of power battery industry, domestic battery enterprises mainly import key equipment from Japan and South Korea. However, as the industry enters the stage of explosive growth, the production capacity of Japan and South Korea equipment enterprises cannot meet the demanding, which also brings opportunities for the development of domestic lithium battery equipment enterprises. Wang said that in the last few years, our country's lithium electric automation has developed relatively low, and after recent years of development, it has now matched the Japanese Korean equivalent of a single device. He also said that how to make the precision and automation of single-core equipment higher, According to the development needs of the industry, segmentation integration is better, which is both a challenge and an opportunity for domestic equipment companies.

In recent years, domestic lithium battery enterprises have made great progress in technology and scale. In Mr. Wang's view, to support domestic lithium battery enterprises in the international leading position, lithium equipment is still a short board in the industry. Wang said that equipment companies not only need to make "advanced and sophisticated" single-core equipment, but also continue to innovate, and have the ability to automate integration to contribute to the industry. He also said that from the single chip, some domestic manufacturers have surpassed Japan and South Korea, In this case, how to make a better cost-effective product is also of great concern to lithium-ion companies.

Wang Weidong pointed out that in recent years, domestic equipment development is relatively difficult, mainly because equipment enterprises still have a certain gap with Japan and South Korea in response speed and flexible customization, which is the direction for domestic enterprises to pay attention to development. He said that the development trend of the industry is to add manpower to the single machine of lithium electrical equipment, and the automatic integration. Before, the equipment used to be manual operation. He also said that all the technology is not winch technology alone, winch technology provides a solution, the customer jointly agreed, by the customer designated more excellent products, delivery and debugging process, YH technology for the overall planning, the early days of everyone's dispute to solve the matter.

After the rapid expansion in previous years, the power lithium battery industry has emerged structural excess, which is manifested in the shortage of high-end capacity and the excess of low-end capacity. At the same time, the price of products is decreasing year by year, while the requirement of new energy vehicles on the range keeps increasing, which will force battery enterprises to improve the core technology, and the market share will gradually concentrate to the superior enterprises in the future. In Mr. Wang’s opinion, the current situation will force upstream technology enterprises to further improve their research and development capacity and management level. The lithium equipment industry will not have a mixed pattern in previous years, and it will be difficult to receive orders without good products. Wang Weidong said, in this context, YH Technology through the integration of science and technology Dongguan ARECONN further enhance development system, improve product competitiveness, the market competitive advantage. He also pointed out that liquidity is very tight this year. YH raised 1.43 billion Yuan in the key period, which is helpful for the company's future development. All the funds raised will be used for R&D investment and the construction of new bases.

At the end of the speech, Wang said YH Technology is willing to work with upstream and downstream, including the same industry, to make its own efforts for stronger national equipment

Scanning And Focusing On YH Tech